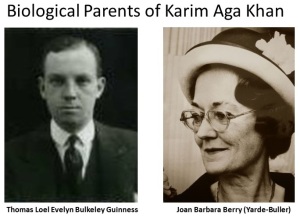 A few years down the road, Joan Barbara, Karim Aga Khan’s mother, again got married to John Seymour Berry. She died on April 25, 1997 at age 89 as a Christian.

Mark Hollingsworth writes that Karim Aga Khan has three passions – women, horses and skiing. He keeps hundreds of race horses, brood mares and foals at Aiglemont and in Ireland. The Aga Khan’s greatest horse was Shergar, winner of the 1981 Derby, who was later kidnapped and never found. 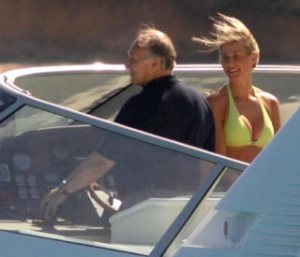 ‘Continuity’ is not a word associated with the Aga Khan’s relationships with women. For the Aga Khan, women must be both subservient and decorative. ‘There is no discussion on this,’ he told his second wife, the Begum Inaara, at the beginning of their marriage. ‘I determine things. You obey.’

In 1968 he had met Sally Croker-Poole. Seduced by the Aga Khan’s attentive courtship and gifts of expensive jewelry, Sally, the daughter of a colonel in the Bengal Lancers, accepted his proposal of marriage, converted to Islam and took the title of the Begum Salimah. ‘I don’t envy the Begum,’ said Yvette Blanche Labrousse, the fourth wife of the Aga Khan’s father. ‘She will need to be someone with a great deal of character and self-discipline, ready to accept second place to her husband and remain in the background.’

The wedding reception was at the Aga Khan’s 13th-century Paris home at 1 rue des Ursins on the Ile St Louis and the guest-of-honor was Princess Margaret. The bride wore a white sari and pearls were thrown at her feet.

But it was not long before the Aga Khan took mistresses and the couple assumed separate lives. The pattern was always the same: at the beginning of a romance, he lavished presents and attention but then his interest waned. One mistress, Italian beauty Milena Maffei, hung around for years in the hope that he would divorce Sally. Then there was Austrian Pilar Goess who had posed nude for Playboy magazine, who he was involved with for seven years before she died of a brain tumor in 1999.

Pilar von Goess was one of Aga Khan’s mistresses and posed nude in Playboy in 1977.

And later Ariane Soldati, an Egyptian who came under the Aga Khan’s spell after her husband died in a polo accident.

Aga Khan’s first wife, Sally, received £20 million in her divorce settlement.   After the divorce, she auctioned off her jewels, which brought her a further £17.5 million.  She has homes in Geneva and London, where she lives with her third husband,  French lawyer Philippe Lizop. 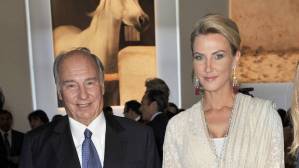