What Aga Khan does for the Muslim World

Recently there has been some feeble propaganda attempts by Ismailis to convince Muslims living the in the West and the ‘liberal’ Muslims living in Muslim lands about how ‘philanthropic’ is Aga Khan and how humanitarian are his projects for everyone and not just Ismailis.

Nothing can be further from the truth. All of Aga Khan’s attempts at establishing institutions are strictly, compulsorily and firmly, for-profit institutions. The poster child of Aga Khan’s public welfare institutions is Aga Khan Hospital and the Aga Khan Hospital is also a testimony to the ‘for-profit’ claim which I mentioned above. The Aga Khan Hospital is not just one of the expensive, but the most expensive healthcare institutions in the cities where it is present. In Kenya, the cost of delivering a baby at Aga Khan Hospital is a whopping KSh 400,000. Together with that, it has had an outstanding number of malpractice and medical negligence cases in Karachi, Pakistan and Nairobi, Kenya. These are not mere claims of medical malpractice, but are civil cases against the hospital and it’s trustees and are publicly available for viewing on the internet. Click here for an example.

The newly opened Serena Hotel in Kabul offers rooms starting at $250-a-night, that’s what an average Afghan makes in a year – including the ones employed at the Serena Hotel in Kabul. These Serena Hotels also openly sell alcohol contradictory to what Islam teaches, but that’s another topic and already addressed in the Inside Ismailism blog previously. 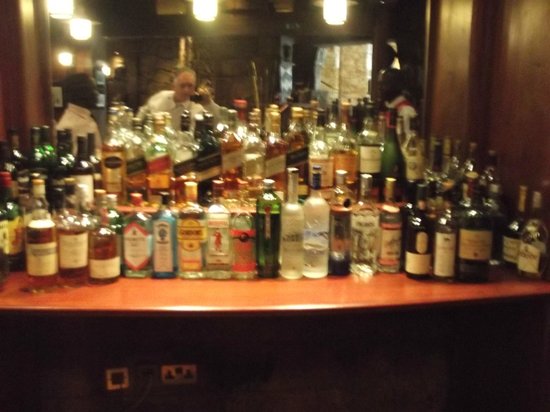 The above is a photo of the bar at Kampala Serena Hotel serving a variety of whiskeys, wines and spirits is courtesy of TripAdvisor.

The above is a photo of a promotional campaign from Serena Hotels, sent from their official Twitter account.

An acknowledgement by General Manager of Serena Hotels, of the review posted on TripAdvisor for the Johnny Walker Black Tie Dinner. Courtesy of TripAdvisor.

Aga Khan’s institutions do focus on poverty alleviation, but these programs are only inward-facing – strictly focused towards the Ismaili community. The aim is to get as many family ‘on their feet’ as possible, for each family which is able to feed itself is required to pay 12.5% of it’s monthly income to Aga Khan.

This 12.5% paid by Ismaili families is called ‘dasond’ which means ‘tenth-part’. Modern day Ismaili missionaries claim that this is a combination of zakat (2.5%) and ushr (10%). However, that’s simply not true because zakat is never ever paid on income and is paid on excess and unconsumed wealth which lies with a Muslim for more than a year. The history of dasond is revealed in Ismaili ‘ginans’ or hymns which are written by their ‘pirs’ or saints in gujrati language.

Ismailis at that time were required to pay their dasond (tenth part) to the then present-day Imam (spiritual father), and were required to pay 2.5% to the pir (spiritual mother) – both from their monthly earnings, completely contradictory to Islamic teachings. However, when Aga Khan came into power, he claimed both positions, Imam and Pir, for himself and asked to be paid both of these shares to himself. This is also a reason why Ismaili missionaries, such as Kamaluddin Alimohammad and Abu Aly A. Aziz can be heard calling the Aga Khan as ‘ruhani ma baap’ or spiritual father and mother in their sermons. All of these historical facts are completely hidden from the present-day Ismailis and the dasond is just equated to zakat and ushr.

It’s not just the issue of dasond vs. zakat. It’s also the issue of the Islamic prayer vs. The Ismaili prayer and the issue of Hajj vs. The Glimpse of Aga Khan and the issue of Ramadhan fasting vs. Shukarvari Beej which distance Ismailism from Islam. All Muslims, including Shia and Sunni adhere to the five basic pillars of Islam of the testimony of faith, prayer, zakat, hajj and fasting whereas Ismailis come in and claim that prayer means not praying as the Prophet (pbuh) did, fasting does not mean abstaining from food and drink, zakat is not paid yearly on excess wealth to the poor but monthly on the income to the Imam (Aga Khan), and Hajj is just getting a glimpse of Aga Khan with your very own eyes.

The Ismaili version of Hajj.

Obviously on a religious ground, Ismailis have not feet to stand on, as all their claims of following Islam just do not make any sense whatsoever, and they then cite the Aga Khan Hospital and other highly profitable institutions which are just businesses run by Aga Khan. The list of these business is not small, it’s a HUGE list.

Aga Khan has cleverly banded all of these institutions under AKFED (Aga Khan Fund for Economic Development) which on the face of it, sounds very philanthropic, but it’s not. AKFED is nothing but a private holding company under which all of Aga Khan’s highly profitable institutions including banks, insurance companies, telecommunication companies, airlines and hotels operate such as:

Auction Houses:
Arqana – One of the world’s largest racehorse auctioning and breeding houses

The Aga Khan Foundation in Canada (AKFC) was recently under investigation and did not reveal it’s audited financial statements to the public. It received $41.9 government funding in 2013 and did not spend that money. In fact, it was found that the AKFC had “enough cash-in-hand to operate for 8 years without even raising even a single penny”. This was reported in Toronto Star and Bloomberg.

Aga Khan’s relationship with the current prime minister was also recently questioned, and is currently under investigation for calling Justin Trudeau’s family to a vacation. Canada has given AKFC $310 million since 2004 and Aga Khan’s vacation call to Trudeau seemed more like a ‘generous cut’ than a generous gift.

Investigation into the Trudeau-Aga Khan relationship resulted in the striking discovery that the island at which Aga Khan hosted Justin Trudeau was owned by an off-shore company. The Panama Leaks database contained the name of this company through which it was found that this company is owned by two other companies. Even the helicopter which was used for transport was owned by an off-shore company. This is the modern way of weaving private property ownership into layers and layers of companies registered in off-shore tax havens. It is impossible for anyone to determine wealth of individuals who use these off-shore companies.

Above: Ismaili priest Nasiruddin Hunzai performing a Ismaili religious ritual with Ismaili women. Nasiruddin Hunzai was the leader of Ismailis in Chitral and Gilgit-Baltistan areas and frequently toured globally. He passed away in 2017.

A few weeks into this and the Paradise Papers were revealed in which Aga Khan’s name was prominently featured. Aga Khan was found to hide the ownership of his expensive multi-million dollar yachts under an off-shore company called Bravo Romeo. Just one of the yacht he owns was valued at 200,000,000 British Pounds in 2014.

Aga Khan was also highly criticized when he milked the Canadian government to grant him $30 million dollars from the tax payers money to establish the Global Center for Pluralism. Moreover, Aga Khan got the premises for the Global center for Pluralism against just $1 for a 99-year lease and later got permission for sub-lease half of the property at market rate to other tenants. This prime piece of real estate was formerly the Canadian War Museum.

Aga Khan and his Ismaili community were also under investigation, this time by the FBI for money laundering when Ismaili community members were found smuggling dasond money (yes, the same 12.5%) across the US-Canadian border. Fortunately for Aga Khan, the Ismailis involved took the blame and the prison sentence upon themselves. The entire saga was covered by CBC’s Fifth Estate documentary called “God’s Money”.

Aga Khan was also revealed to have funded Tajik separatist terrorists against the current Tajik government and the story was published as ‘West plans new country for Ismaelites’ [sic] in Press TV.

The Aga Khan also owns a $100 million island in the Bahamas, a superyacht with which he breaks speed records, racehorses which win him derby money and settles record million-dollar divorces with Western supermodels who go back to Christianity after ‘accepting Islam’ while married to Aga Khan. But that’s a another bunch of topics.

Whether you are a Ismaili or a Muslim, whenever you are giving your ‘time and money’ to anything owned and operated by Aga Khan, know where you time and money is going, as the money trail always leads to the truth behind the façade.

Giving out free #LessonsInIsmailism.
View all posts by Akbar Khoja »
« Hazar Imam’s Birthday “Salgirah Mubarak” in Light of The Quran
Holy Terror: How Ismailis laid foundations of terrorism in the name of Islam »

11 thoughts on “What Aga Khan does for the Muslim World”