See You in Court: How Hazar Imam Took Two Ismailis to Court 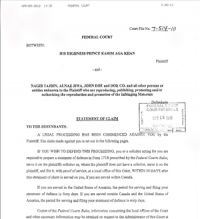 Copy of the Court Order

For the first time in history, Nizari Ismāʿīlīs are actually now “deeply concerned” about being dragged in court if they do not listen to Hazar Imām. In an unprecedented move, Aga Khan IV sued Alnaz Jiwa and Nagib Tajdin in Canadian courts ignoring his own Ismaili International Conciliation and Arbitration Borad (ICAB) and National Conciliation and Arbitration Board (NCAB) which he himself has established for settling disputes inside his own community.

The ‘shocked’ Ismāʿīlīs were Alnaz Jiwa and Nagib Tajdin – both from the Canadian Ismāʿīlī Jamaat. The Law Times News stated that the Aga Khan alleged in the claim that Jiwa and Montreal businessman Nagib Tajdin infringed his copyright and moral rights by compiling a book that collected addresses delivered to Ismaili communities around the world between 1957, when he assumed his title, and 2009.

The book included 589 Farmans – addresses the Aga Khan gives as imam to his followers – and 77 Talikas, which are brief religious messages to Ismailis in writing. The suit claims the Aga Khan is the sole author of those materials. Colleen Spring Zimmerman, a partner with Fogler Rubinoff LLP in Toronto, says she has never seen a case like this one with a religious leader taking on one of his own followers.

“It’ll be interesting to see from a moral rights point of view whether the defendants have said anything to which he would object and to what extent he has the right to stop the reproduction and distribution of this work solely on the basis of moral rights rather than copyright,” Zimmerman says. “I’ll be very interested to see what the court has to say on that.”

Not only in Ismāʿīlīsm, but this move is unprecedented in any form of variation of Islam – which Aga Khan insisits that they belong to. In a sharp contrast, Hadith books and literature such as Sahih Bukhari, Sahih Muslim and numerous other collections of Hadith books are not only available for purchase, but freely available on the internet for any Muslim and non-Muslim to read and learn from.

However, after the conquest of Makkah, he abrogated the initial prohibition which is understood by the hadith of Abu Shaah, and allowed ahadith to be recorded which have reached us through unbroken chains or narrators in the form of Sahih Bukhari, Shahih Muslim and others.

On the other hand, Ismāʿīlīs keep their own literature tightly capped and try their best not to reveal any of their farmans, literature and rituals. However, due to the advent of the internet over the past two decades many secret Ismāʿīlī ceremonies, books and rituals have been exposed in public. Still all Ismāʿīlīs are strictly forbidden to pull out their cell phones inside the worship halls for fear of the Ismāʿīlī rituals being recorded and brought out in public.

The news article can be found in newspapers as follows:

Aga Khan himself has proudly setup a website ridiculing Alnaz Jiwa and Nagib Tajdin at http://www.lawsuit2010.com

Giving out free #LessonsInIsmailism.
View all posts by Akbar Khoja »
« Aga Khan’s Ex-Wife Reveals All of His Secrets: From Lollypops to the World’s Biggest Hunk of Sugar
“Exposing Ismailism is a Noble Act and an Obligation in Sharīʿah” – Mufti Ebrahim Desai »

3 thoughts on “See You in Court: How Hazar Imam Took Two Ismailis to Court”