Facing the Wrath of the Ismailis 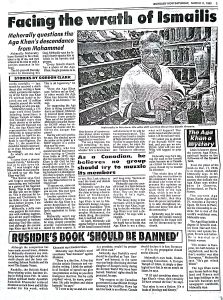 Facing the Wrath of the Ismailis, Burnaby Now, March 11, 1989 (Click for full-size image)

Akberally Meherally leans forward in his chair, takes a sip of tea, and then relaxes as he tries to craft a perfect sentence in his head. The 61-year-old Burnaby writer is choosing his words carefully – last mmonth he received a death threat after writing a book which questions the authority of Karim Aga Khan IV, spiritual leader to between one and fifteen million Ismailis around the world, depending on who you ask.

Meherally’s book, a 171-page work titled Understanding Ismailism: A Unique Tariqah of Islam (click to download), has brought more than death threats to its author. The Ismaili Council for B.C., the Aga Khan’s local representative, has called Meherally to appear before a tribunal in April to answer to charges that his book is sacreligious. On Nov. 11, the council ordered the Ismaili community to shun Meherally and his writings.

So what’s all the fuss about?

“I come from a devout Ismaili family,” Meherally says as he puts down his tea. “I was taught Aga Khan is God. In our prayers we used to say the Aga Khan was God. The Koran says God will forgive anything but associating any individual as a partner fo the Supreme Being. That is the biggest sin that will not be forgiven. This is also true for Judaism and Christianity. In the Bible it says don’t bow down before anyone, I am your jealous God.”

Meherally, a jolly man who peppers his conversation with crackling laughter, says all the major religions take exception to humans claiming God-like status. And although the current Aga Khan says he is not a God, Meherally says the Ismaili church equates him to Allah in its hymns and prayers.

“Every Ismaili church has a photo of the Aga Khan. People prostrate to it. This is all hypocrisy.” he says.

“Here the Aga Khan says: ‘believe me as God.’ In other words the Aga Khan has become God, which is un-Islamic,” he says.

By suggesting the Aga Khan is doing something that is unislamic, Meherally received death threats in February from people “from out of the province.” Meherally contacted Burnaby RCMP when he received the threats and believes the danger has passed.

But his wife still worries, he says. She checked up on the author as he spoke to a NOW reporter in a coffee shop near his store.

Meherally, who has owned several businesses since moving to Canada from India in 1975, says that for suggesting the Aga Khan is not God he has brought the wrath of his church down upon him. He doesn’t think that’s fair, saying his book is a theological text that is simply trying to determine the truth:  Does the Aga Khan believe he is God or not?

“If you are not, come out and tell the Ismailis that you are not. You can’t have your cake and eat it too.”

Another question raised by Meherally’s bookis whether the Aga Khan is a direct descendant of the Prophet Mohammed (pbuh), Islam’s equivalent to Jesus Christ.

Meherally won’t say what he believes. His book, he says, simply compiles several inconsistencies raised by other experts. It  lists dozens of controversies about when certain people in Mohammed’s lineage died or were born.

“I’m not a historian, I’m just compiling,” he says. “I’m not commenting on whether he’s a descendant or not. But I ask others to read the book and decide for themselves.”

In April, Meherally will appear before a committee of the Ismaili council which will determine if he will be excommunicated. The council has hired a couple of high-priced lawyers from Toronto to argue their side of the case, he says. In Meheraly’s corner sits former Vancouver alderman and long-time Vancouver lawyer Harry Rankin.

Meherally says the council’s court is a farce because it is appointed by the Aga Khan. How can the court decide if he’s right, Meherally says.

“The funny thing is that the board, which is appointed by the Aga Khan, is going to decide whether the Aga Khan is no isn’t a descendant,” he says with a chuckle.

“If I prove the case and the board has to decide that Aga Khan is not a diety, what will happen? The whole board and the constitution will be nul and void.

“If I asked you to decide if the Burnaby NOW was bad, and you are an employee, what will you say? What will happen to your job?

Meherally says he’s taking the case to the Ismaili court because as a Canadian citizen he believes no group should try to muzzle its members.

“The whole idea of the trial is that they want to show to the community that any individual who writes or expresses his opinion or view on the subject of Ismaili faith of the Aga Khan, which is not in accordance with their conventional beliefs, then they have the power and authority to take disciplinary actions and throw him out of the community.”

Meherally says he wants to fight the Ismaili council so people in the future wil not be threatened by the church.

The Aga Khan – A Mystery

Little is known about the current Aga Khan, spiritual leader to the followers of the Ismaili faith.

Even the place of his birth on Dec. 17, 1936 is in dispute, Akberally Meherally says. In his book, Meherally quotes sources that indicate the Aga Khan was either born in Geneva, Switzerland, or Paris, France.

The current Aga Khan, Karim Aga Khan IV, remains a mystery figure. He lives in Paris, but his citizenship is unclear. He is one of the world wealthiest men, Meherally says.

The Aga Khan holds a degree in Islamic studies from Harvard University and speaks English, French and Italian. He is married to a British woman.

“His mother is European, his half-brother is anglo-Irish, and his father’s mother was also European,” Meherally says. “He’s got mixed blood.”

The Aga Khan owns race horses both in England and France and has large holdings in the tourism business and newspapers worldwide, Meherally says.